Photos of mine have been captured by Elickr’s Explore algorithm a handful of times. Each time I wonder why for a few moments before I remind myself that a computer program can’t see photos, derive possible relevance, think about or consider what the photographer may have been thinking about when the shutter was pressed.

That makes me think, why would anyone care whether one of their photos made it into Explore? I can’t come up with a reason that a photographer would be motivated to try to get his images into Flickr that could possibly relate to the quality of his photography.

After all, who could possibly aspire to impress a computer’s programming?

It’s easy to imagine one possible motivation residing in a miniature version of Warhol’s Fifteen Minutes of Fame, and I know some photographers who are looking for just that. At the same time, I can see Flickr’s motive in developing and refining the Explore algorithm. I don’t browse the images in Explore very often but when I do I see lots of close-up photographs of birds and a lot of huge landscapes with surreal or at least very dramatic color.

The photos in Explore are nearly always conventional in the extreme. The occasional unusual photo (unusual either in subject or execution) nearly always strikes me as something that made the algorithm experience the computer-software equivalent of bemusement, for a mere fraction of a millisecond. Today there’s a simple photo of a miniature figurine of a lion. I can imagine the data chain inside the algorithm wondering silently to itself, is that miniature lion really alive?

That question got me thinking about just how unlikely it is that the algorithm will ever be able to judge truly interesting let alone good photographs. Think of the objective differences between an Ansel Adams photograph of Yosemite National Park and the millions of other images captured from the same or similar vantage points. Now think about how you would go about creating a program that recognizes artistically good light and a well-seen composition. It’s hard enough for a human viewer to get a sense of what the photographer was trying to achieve and so wholly arguable as to how well that effort or vision was achieved. The genuine wonders of artificial intelligence notwithstanding, identifying good photography is going to remain a real problem for Flicrk’s algorithm. I’m sure the folks at Flickr are doing their best but it’s not very good.

This brings me to the photo of mine that found its way into Explore. 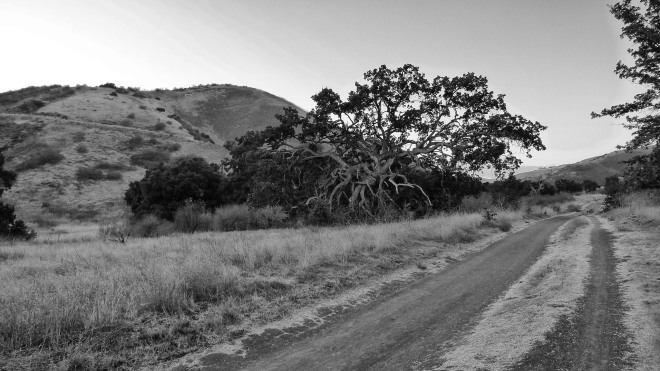 Crap, even I don’t like this one all that much. I took it about twenty minutes after the sun fell behind the foothills. I had been out looking for an oak I photographed back in April. Somehow, I couldn’t find it even though I though I was certain about where it was. Obviously, I wasn’t. As I hustled through the canyon, trying to beat the coming darkness, I spied this huge tangled mass of an old tree and looked at the road go on beyond it.

As I did I thought to myself, that old oak knows exactly where that road leads; toward autumn. So, I turned around and snapped this. Yes, I kept the branches of the tree on the right in the frame intentionally.

Now thousands of Flickrites have viewed it and hundreds have faved it.

No, I’m not upset this photo is in Explore.

Yes, it’s nice that so many people are seeing it (I suppose).

But, in the end I am far too selfish to care what a bunch of people who don’t know me think about one of my more marginal photos. I’m trying, in my way, to be a better, more aware, more sensitive and more creative photographer. It’s doesn’t matter to anyone other than me if it happens. Maybe in some backhanded way having this image in Explore has rekindled that singular clarity of mission.

It could be that Flickr algorithm is better than I thought.