I realize most people don’t get excited about putter grips.

But, I think they should, if they want to make a more consistent stroke while applying less grip pressure. Grips are the only point of contact a player has with the club and you need the very best connection with your putter, the ultimate scoring (or non-scoring) club.

The first time I tried a Rosemark grip four years ago I was hooked.

There was no adjustment period, nothing to get used to, the grip just felt better from the first moment I used it. My assumption was that I liked the material, especially the microfiber underlayment and the polymer nubs.

There are at least two secrets to Rosemark grips.

The first is shape. Mark Cokewell head honcho at Rosemark told me the cross-sectional shape of the grip is the result of mapping the hand’s points of contact with the grip. The other secret, especially on the older versions I have used for the last few years, is the combination of the microfiber foundation and the polymer nubs I mention above.

Mark Cokewell had this to say about his latest models.

“The Wide Top is a non taper non pistol hexagon grip that was designed around the contact points of the hands. It has a wider face thus the name Wide Top. We came out with the Wide Top early 2018 and it has won three times on the LPGA so far. Jasmine Sawannapura (Marathon Classic) and Brooke Henderson (Lotte in Hawaii and Meijer in Grand Rapids). All of our grips except the 7Teen are available in both MFS (Microfiber Silicon) with the beads AND Neo (Neoprene) smooth. The Neo grip material is super high tech and stays tacky when cold/wet or with sweaty hands. It won’t get slippery when dirty and it’s washable although it rarely needs to be cleaned. It will last at least twice as long as a PU material grip (SuperStroke). The MFS grip has a Microfiber base with silicon beads added to enhance feel and tackiness. The Microfiber wicks away moisture while the beads provide the tack. A synthetic breathable coating is applied last to enhance tackiness where the beads are sans. The areas of the grip void of beads are super receptor areas where the finger tips and thumbs make contact with the grip. This feature provides better tactile feedback of the ball coming off the face of the putter and aides the golfer to develop a better sense of pace on putts and also feel when putts are hit off center.” 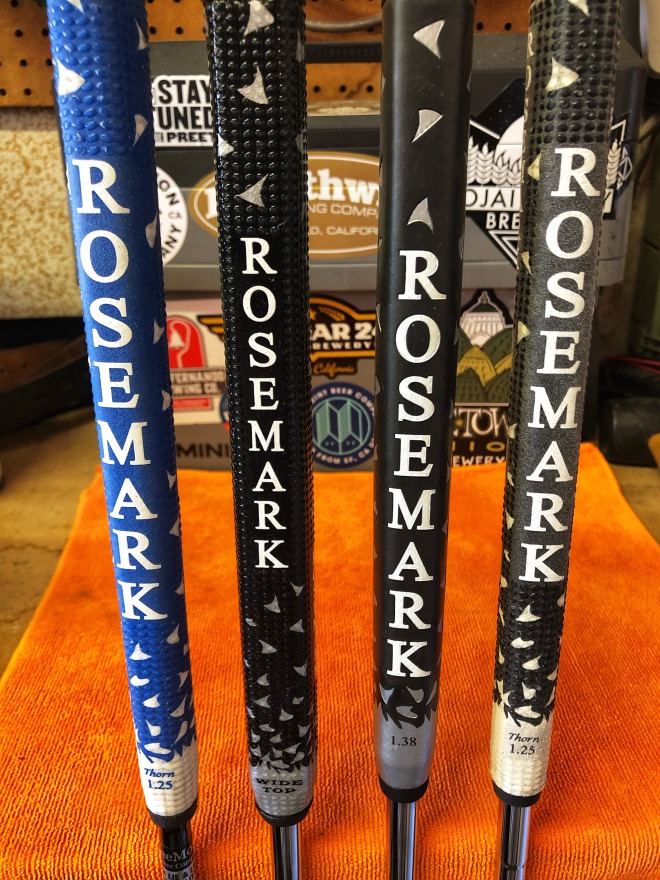 Here are the original Rosemark designs on my gamers and two of their new designs.

The Neo is second from right and the MFS Wide Top is second from left. Me? I could make putts with any of them but I must say that the Neo is really growing on me. I thought I would miss the nubs (Mark Cokewell calls ’em beads, by the way) but I didn’t.

In the end, it may be that the overriding benefit of using Rosemark grips is the cross- sectional geometry that, for me, makes it not only easier to set my grip pressure and forget it but also to enjoy superior feel in all weather.

Still, I love the texture of all of the Rosemark grips, so I think that’s  huge issue, too. A grip that feels better will perform better in the same way that a club that looks better behind the ball is likely to result in better ball striking. The materials and designs employed by Rosemark allow their grips to convey a lot about the quality of the strike. And, the better the strike the more likely your putt is to stay on its line and roll the distance you need. I have not used any other grip that gives me the feel of a putt, whether long or short, anywhere near as well.

Why be uncomfortable when you can be so, so comfortable?

Go out there and make some putts!

Yes, I am a little too precise with this regripping thing and I’m not sure why.

I’m not even going to burden you with a blow-by-blow account of my grip replacement protocol.

Instead, let’s talk about grip solvent. I know, that’s some nasty, boring stuff.

For years, I’ve used the Clubmaker brand, though I always disliked the smell and its tendency to cling to my hands even after repeated washings. So, I decided to try Wedge Guys grip solvent. It was reputed to smell better or at least less bad.

It’s true. It doesn’t smell bad at all and the order doesn’t seem to linger in the air as long as Clubmaker.

The stuff dries very slowly and, this is a weird one, stays a little slimy even after it’s been on a grip for weeks.

How do I know this?

I know because I removed a few grips weeks after I installed them and the grip caps were still slimy and almost damp. Remember, this is SoCal so it’s both hot and dry.

So, my experiment is over…I’m sticking with Clubmakers.

The Rosemarks are installed, so let’s talk about the thrilling topic of Grip Solvent!

Regular readers know I am a huge fan of Rosemark grips.

I have been a believer in Rosemark since 2016 and I use their grips in all my putters.

I am very excited to learn if these new grips can meet or possibly exceed the standard set by the original Rosemark designs that I’ve used with great success.

Only time will tell.

They new ones look great and I’ll be installing them pursuant to my usual obsessive-compulsive grip installation standards later this afternoon.

The new Rosemark Grips have arrived!

I read an article not long ago that showed photos of the writing desks of notable authors.

It was interesting, a little, in the way going to an open house can be. Every writer seeks a space of control and comfort. I’ve been at this a long time and while I’ve never gotten it completely right, I can work with what I’ve got.

That’s an eight year old MacMini in front and an even older one on the left. Both work just fine, thanks. The star of the show is the old Samsung SyncMaster 2243 monitor that allows me to have two full pages on the screen at once.

When I discuss comfy, I’m thinking of the kind of comfort that allows an aspiring violinist to practice for hours without causing a repetitive-stress injury. This is the kind of comfy that flows from technique and ergonomics.

Years ago, I was lucky enough to have an ergonomics expert show me how to sit in a chair while engaging my feet with the floor.

I practice it to this day.

Still, I am not good at sitting for long periods of time. When I manage to bang out a bunch of words in a day I spend a lot of time out of my writing chair. There’s nothing physically healthy about writing and I’m trying to minimize the injury.

So, no matter how plush or comfortable your writing desk is, please get off your ass often.

Your heart will thank you.

I have considered a standing desk, but I have a feeling it would simply create a physical shift in stress. My guess is from lower back to upper back.

Still, I may try it someday.

Best writing advice for a Monday: Be comfy when you write.
Loading Comments...