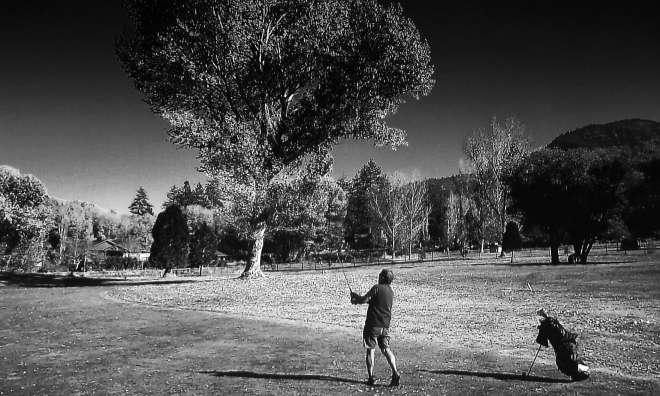 I think this was taken during the last round of golf that three of my brothers and I played at Pine Mountain Club in 2017.

Though the grasses on the course go dormant some locals play all winter long. But I think it’s better to give the course time to recover between Thanksgiving and Springtime.

The real frame was full of color of course but for some reason I liked this better in this rather severe black and white processing done with Silver Efex Pro.

The wonderful colors of Spring will be all around us when we start our 2018 season in a couple weeks. After battling a bothersome shoulder injury that pretty much gutted my entire 2017 golf season, I’m finally ready to tee it up again.

The Schaeffer Fire had been burning for well over a month by the time I caught this image on the road to US 395 west of the Cottonwood Charcoal Kilns in Inyo County. There were no fewer than three wildfires fires burning in California at the time (mid-August). 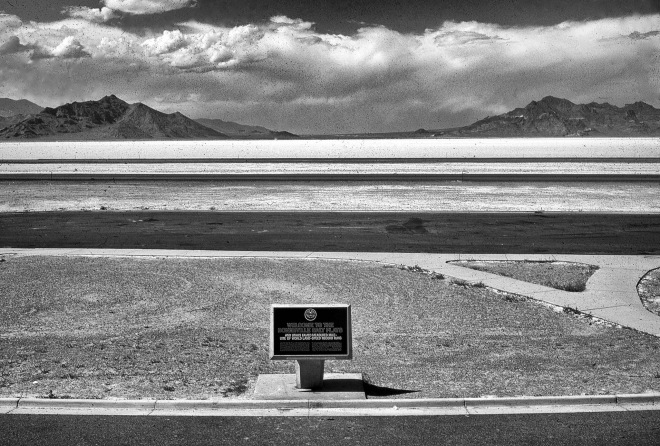 When I was a kid I was fixated with the land speed record attempts that took place at Utah’s Bonneville Salt Flats. I was around eleven when I finally got a chance to see the place for myself. Much to my delight my father even took our 1966 Pontiac Bonneville (no kidding) out on the flats for a few high speed passes.

Those, indeed, were the days.

I took this photo with my father’s Argus C3 on that trip way back in the early 1970s. The negative was buried somewhere in a box of over 6,000 images left behind by my parents. Most of the images were out-of-focus castoffs, but there were a few gems among the rubble.

I’ve not been back to the flats. I’ve learned that the salt on the flats is thinning, but no one is quite sure why. It makes me want to go back to that day when the salt was flat and thick and dustless and I sat beside my father, speeding across the horizon.

It never fails to amaze me how often the humble iPhone 5 ends up seeing duty when a better camera would have been more suitable. Just a few minutes earlier the light was even more spectacular and the lenticular clouds were nearly luminous.

The Schaeffer Fire, Bonnevile Salt Flats, US 395 & the Sherwin Range