You can buy this little beauty here.

I’m grateful to Fred Greene, head honcho of the GolfSmarter podcast, for a number of things. One that I hadn’t anticipated was how much I enjoyed being interviewed by him for his podcast. Though it was a little out of my experiential-comfort zone, I really enjoyed it. I’m a born talker (as I think most writers are) but speaking formally over the course of 30 minutes is a different kind of talking than most of us are used to doing.

But, again, I liked it. I soon had the idea of doing an audio version of my golf short story, Kingdom of Dreams. I saw the effort as a study that would help me determine whether I could successfully narrate my novel, John J. McDermott & the 1971 U.S. Open.

I think I can.

Though I’m not bowled over by the quality of my narration so far the results seem workable and I’m hoping to get better as I gain experience and learn from my inevitable mistakes.

It didn’t take long to figure out I needed a microphone that was better than the built-in mics in any of my Macs or my iPhone. I asked around and did (very) little research.

A trusted podcaster I know recommended the Blue Yeti but I wasn’t all that enthusiastic about dropping $125 on something that could soon end up collecting dust on a shelf.

So, I decided on the Fifine K669B. I’m mean, it’s only $29 at Amazon and it’s Prime-eligible so there’s very little to lose.

Some of you may know I worked in high end audio for decades and have reviewed well over a hundred high end products. I’ve also been formally and informally involved of scores of recording sessions from pop to classical.

But, I’ve never actually reviewed a microphone. The more I thought about it the more I realized that something really critical to proper audio reviewing was missing.

Let’s say it again…there’s no reference.

A given reviewer may like the way his voice sounds on Mic A instead of Mic B but that is no predictor of whether anyone else will like the sound of their voice when captured by Mic A.

A significant part of mic performance can be evaluated objectively but most reviewers confine their objective comments to describing features which is fine as far as that goes, but features do not relate directly to quality when you’re talking about audio fidelity.

So, what can I say about the Fifine? I can say it’s fine…for me. It has a fixed cardioid pattern that’s well suited to my simple needs and is truly plug & play (at least on a Mac).

Also, the little fellow is nicely put together, seemingly solid, yet not overly heavy. Some will surely complain about the captive USB cable but at least you know that if you remembered to bring the mic you also remembered the cable!

The only adjustment on the mic is for volume and I found the sensitivity to be plenty wide for my needs and is quite smooth. The volume knob has a reassuringly heavy feel and is easy to position precisely and consistently.

I found set up to be as simple as plugging the mic in and hitting record and I designate the sound quality as just dandy (I know; far too many technical terms).

For $29 there’s just nothing for me to complain about.

Lastly, the Fifine Folks appear to be very responsive at least related to their Amazon sales. This is especially impressive for such an inexpensive product and shows the company understands that early efforts related to customer service will help them build their brand over time.

A Quick Review of the Fifine K669B USB Microphone 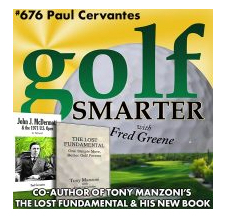 Exciting News: Now you can listen to my interview on the GolfSmarter podcast here:

It was really generous of GolfSmarter’s head-honcho, Fred Greene, to invite me onto the show. He does an amazing job on the podcast and makes the entire process so enjoyable for the guest. The experience made me want to do it all again, but to do a little better job.

I did the interview cold; I didn’t know what questions Fred would be asking in advance. That ramped up my anxiety factor a little at the outset but once we got rolling the interview took on a nice flow. Fred’s a real pro and a great friend to golf.

I was very pleased to have the opportunity to talk about the release of the second edition of Tony Manzoni’s classic golf instructional book, The Lost Fundamental as well as the availability of my new book, John J. McDermott & the 1971 U.S. Open.

Thanks, Fred, for providing the forum for me to share two of my favorite subjects with you and the entire GolfSmarter audience.

Listen to my interview on the GolfSmarter podcast
Loading Comments...